“In America today you can murder land for private profit. You can leave the corpse for all to see, and nobody calls the cops.” Paul Brooks, The Pursuit of Wilderness. 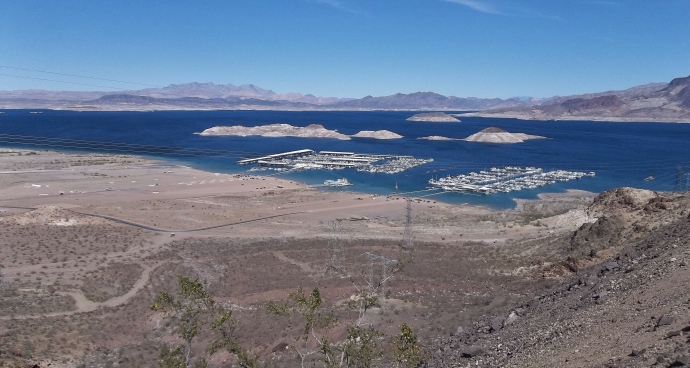 This is Lake Mead, America’s largest reservoir. A drought stricken south west and a flow stunted Colorado River have shrunk Lake Mead to its lowest level in generations.

My heart broke upon seeing the white bath tub line around Lake Mead a few months ago. A two day visit to Lake Mead left me with more questions than answers. Hiking the Historic Rail Road trail to Hoover Dam I wanted to understand how our government leaders, corporations, private land owners, media outlets, education institutions and society has failed to adequately address the drought and the long term sustainability of agriculture in the south west.

From a legal stand point I feel water tends to be treated as a private or government asset. For this, we have and are paying a heavy price. I have always felt that if you want to understand a problem, grab a shovel and dig. Once you unearth the key factors and key players, you call them out. I think in the case of the southwest drought, especially in my former home state of California, we have been misled, misinformed and like the rest of the nation find ourselves somewhat disconnected regarding our relationship with natural resources. Resources necessary for survival!

Is it time to re-frame our relationship and understanding of water as a basic necessity?

Has commodifying and privatizing our natural resources contributed to our disconnection?

If we are less aware of our dependence on nature for our most essential needs, are we less inclined to get personally involved in protecting it?

The Nature Conservancy’s poll results showed an overwhelming majority of Americans do not know where they water comes from. Approximately 77% could not accurately identify the natural source of the water used in their homes.

Has America’s sophisticated public water system that transports water from rivers, lakes and aquifers right into our homes contributed to our intimate relationship with the faucet?

When did we form a brand loyalty to bottled water and dismiss our relationship with the original source?

Why did we divorce Mother Nature only to marry bottled water? 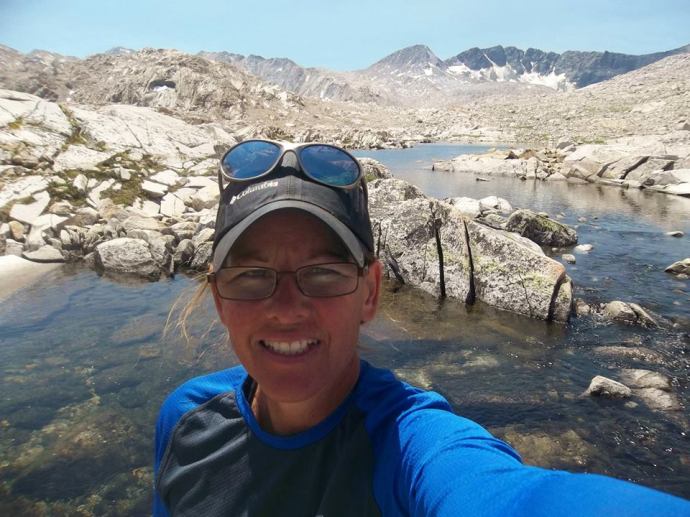 As a backpacker locating and securing water is a regular daily chore on trail. Over the years hiking has made me hyper-conscious of water.

I no longer see it as just a resource. It’s more a life or death necessity. Water is a gift and a privilege, yet somehow we seem to hold oil to a higher value.

How do we create an emotional and behavioral change regarding our relationship with water?

Do we start with our education system?

As a student I remember being schooled on the science of water, but the curriculum never addressed sustainability, water footprints and water related polices.

Would charging more for water instill a sense of value for a resource we seem to take for granted and feel entitled to? 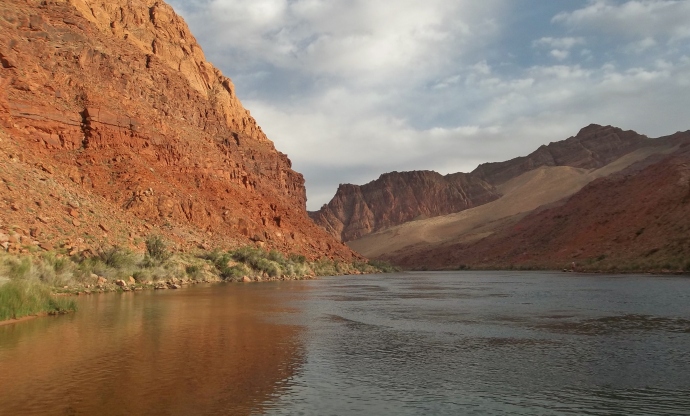 Agriculture from California to Wyoming soaks up three-quarters of the Colorado’s water, which in turn produces 15% of the nation’s food. California produces more food than any other state, supplying a large portion of the nation’s milk, beef and produce. Considered to be one of the country’s driest states, California’s agricultural sector places enormous pressure on the entire south west’s water supply. The question beckons, is agriculture as we know it realistically sustainable in California?

Drought conditions in California have caused residents to drastically reduce their household water use. Like many, I was surprised to learn that only 4 percent of California’s water footprint stems from individual and personal use.

According to a 2012 Pacific Institute report, 93 percent of California’s water foot print goes to agriculture. While many concerned California citizens are shortening their showers, shutting off the faucet while brushing their teeth, and only washing clothes with a full load, the most drastic act of water conservation would be to look at our food choices. Yes, that’s right, our food choices and diet have a far greater impact on water conservation than we have been led to believe.

Of the foods produced in the Golden State, the thirstiest by far are those that are derived from animals. Household water use is a trickle compared to the flood of water needed to produce meat, dairy, and eggs, especially when compared to plant foods. It takes less water to produce one year’s worth of food for a completely plant-based diet than it does to produce one month’s worth of food for a diet with animal products.

The Water Education Foundation calculates that every pound of California beef requires about 2,464 gallons of water to produce. Individuals could save more water by replacing a pound of beef with plant foods as opposed to limited showering for six months!

I feel we also need to re-consider soy and corn crops which feed the vast majority of livestock. Corn and soy are government subsidized crops. By 2013, 90% of all corn and soybeans planted in the United States were genetically engineered according to the United States Department Of Agriculture. Even though these crops may appear cost effective, they are considered to be exogenous. Exogenous crops have a deep thirst for water and therefore an additional drain on an already wasteful system of processing animal products.

How would corporate factory farms respond to a smaller market and declines in profit?

From a health perspective America would be a healthier society by reducing our meat intake. As a nation we eat three times the international meat average and twice the recommended amount for good nutritional health.

Is it possible we have become a nation lacking in self care?

If so, how can we realistically care about our natural resources when we are unable to manage our own self care?

America – from the government, corporate, societal and individual level – has developed an unhealthy relationship with money, food, and self care. All three are directly related, and like with any abusive relationship we are in denial. We are refusing to admit the truth and the reality of  the current drought. Instead we justify, rationalize, and continue the blame shifting in order to maintain and continue the insanity.

How do we re-learn and re-establish healthy relationships with self and Mother Nature?

The lesson plan can be can be found with the indigenous. For indigenous groups, nature holds a sacred quality which appears absent from Western thinking. Nature is not merely a productive source, it is the center of the universe, and the core of a culture.

In theory, I think America understands that all living and non living things are intrinsically linked. Practically though, we tend to base our resource decisions on economic exchanges and profit sharing. Indigenous tribes understood the reality of scarcity, and based their resource decision on ecological exchanges with nature. Economy over ecology is the modern man’s way of thought, as opposed to Indigenous tribes who built their societies around institutions that encouraged healthy humans and natural resource stewardship.

In 2014, I feel we have failed as a society to maintain, sustain, and when needed, modify our behavior and business practices to live in harmony with natural resources. Our politicians and legislators, regardless of political affiliations, are walking contradictions when it comes to the drought. In February of this year President Obama paid a visit to Fresno, addressing California’s drought. He called for a shared sacrifice to help manage the state’s worst water shortage in decades. The contradiction: he then spent the rest of the weekend in the state’s top water hogs: desert valley golf courses.

The desert’s lush fairways set against brown mountain backdrops have helped make the valley a golf mecca. Golf has driven the desert’s economy for over fifty years, attracting tourists and resort home sales.

Is it realistic to expect, maintain and sustain lush green golf courses in a dry drought stricken desert?

Again, is it economy over ecology?

Do we continue our current practice till it is no longer sustainable or profitable?

Can we permit ourselves to make adjustments, and get real about water based business in dry deserts?

Why are golf courses paying much less for water than residential customers?

Would creating an equal water pricing system help change our mentality from profit to preservation?

It seems not, drought conditions in the south-west  has not slowed down hydraulic fracturing or “fracking” permits. From Texas to California, drilling for oil and gas is using billions of gallons of water in the nation’s most drought stricken and prone areas.

California’s historic drought and shrinking water supplies are placing a spotlight on fracking and its thirst for fresh water. Fracking not only consumes millions of gallons of water to extract oil and gas from each well, but it’s also a water contaminator.

Of the nearly 40,000 oil and gas wells drilled nationwide since 2011, three-quarters were located in areas where water is scarce, and 55% were in areas experiencing drought, the report by the Ceres investor network found. Fracking those wells used 97 billion gallons of water, again profit over preservation.

In California, 96% of new oil and gas wells were located in areas where there was already fierce competition for water. This pattern holds for other regions caught up in the oil and gas rush. Most of the wells in New Mexico, Utah and Wyoming were also located in areas of high water stress.

Farming and fracking are two industries that are finding themselves fighting for water in California’s San Joaquin Valley. Although California frackers use less water on average than in other states, the trend is shifting, as oil companies make a play for Monterey Shale, the largest untapped oil resource in the country.

Oil drilling has steadily grown around Wasco over the past two decades, solidifying the area as one of California’s newest developments. Locally known as the “Rose” oil field, Wasco was once the rose growing capital of California. Industry experts believe as much as 13.7 billion barrels of Monterey Shale could be tapped from the Wasco area.

As of May 27th 2014, this is what California looks like. Look at the terminology; we are in a state of severe to exceptional drought. Summer is upon us, it will only get drier. 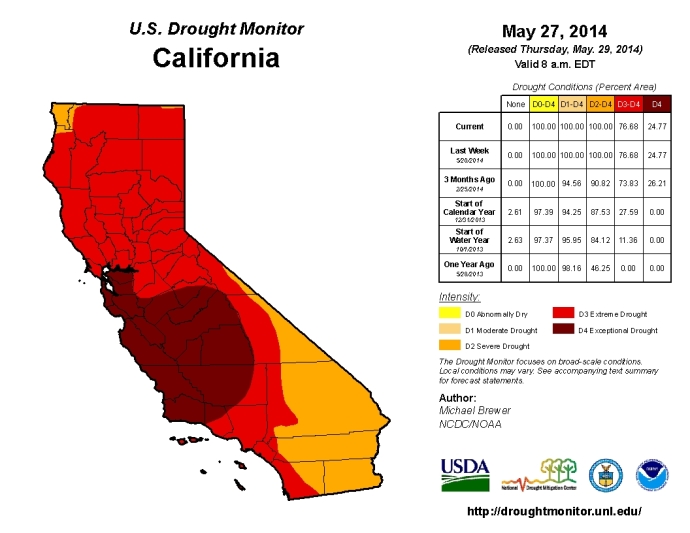 Human potential movement activist, Jean Houston once said, “The ecological crisis is doing what no other crisis in history has ever done, by challenging us to a realization of a new humanity.” Ms Houston is right, however, I don’t feel we are taking her words seriously.

My visit to Lake Mead inspired me to de-myth some of my beliefs about water. Researching and reading about the south west’s drought once again reinforced the idea that if you flood the mainstream media with misinformation and myth’s, the focus will remain on individual use and not government, corporations and society’s.

4 thoughts on “A HIKER’S PERSPECTIVE – DROWNING IN THE DROUGHT”