Have you ever dreamed of being able to open your back door and find yourself on trail? I have over the years, and it seemed more like wishful thinking than a livable reality. 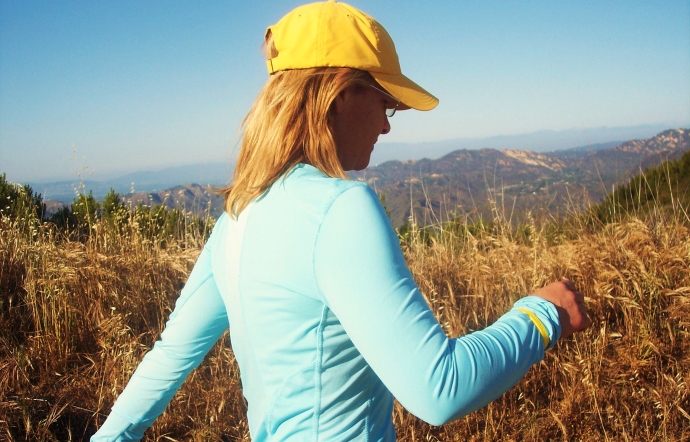 While living in Southern California I would drive 30 minutes through traffic just to hike through a county park trail. During the winter months, I remember being on the freeway at 4am; so I could commute to the San Gabriel mountains for some altitude and snow. 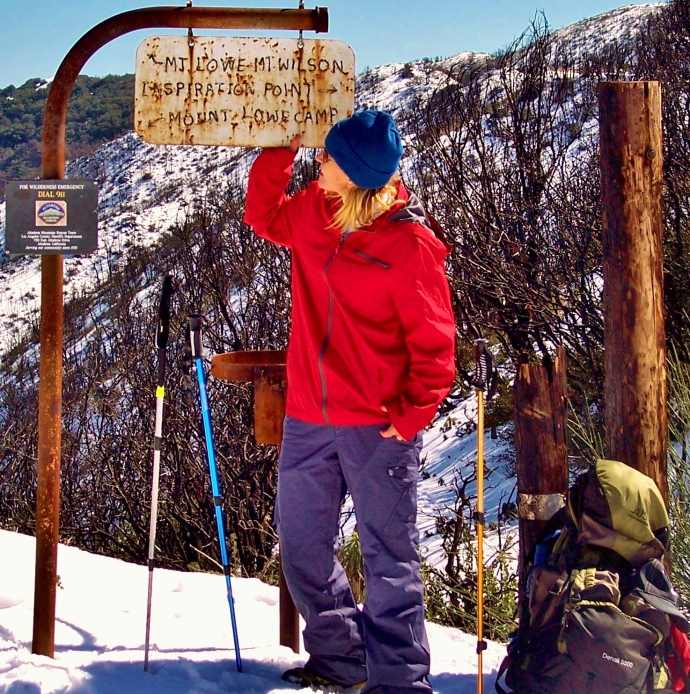 One of the many perks of living at Vermilion Cliffs is the trails, private trails actually, that lead you deep into the cliff wilderness. From my back door, this is the view that flirts with me every morning. 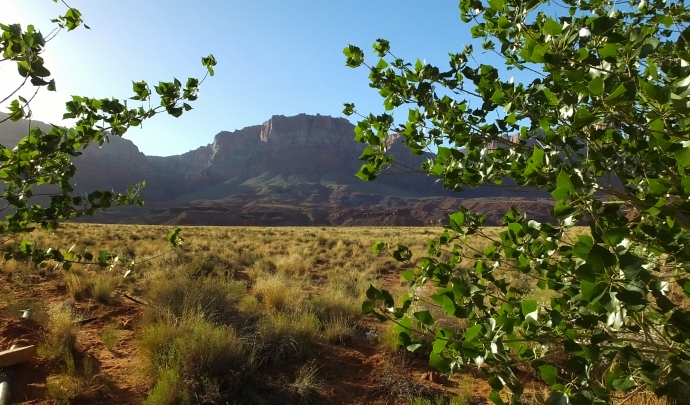 How could I not be inspired to head out and explore my new habitat? For Shadow, it’s a new area to patrol in his mind. His puppy days of patrolling the Fresno canals and urban streets have now been replaced with navigating desert washes, and climbing sandstone cliff ledges. 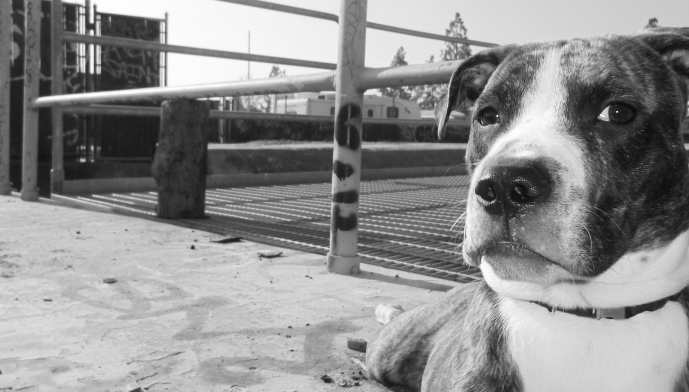 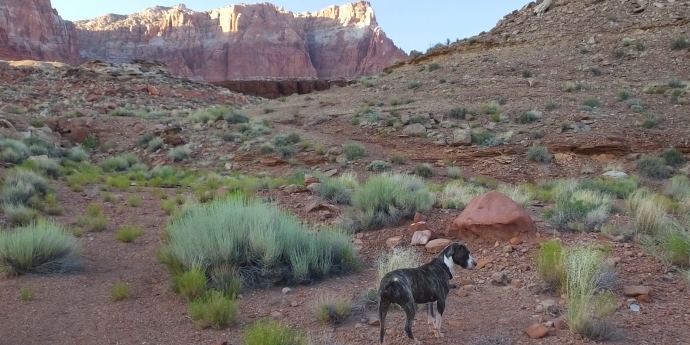 Prior to Vermilion Cliffs, Shadows only sand experience was at Kelso Dunes, in California’s Mojave Desert.https://remoteleigh.wordpress.com/2014/05/03/mother-natures-sand-box/?shared=email&msg=fail 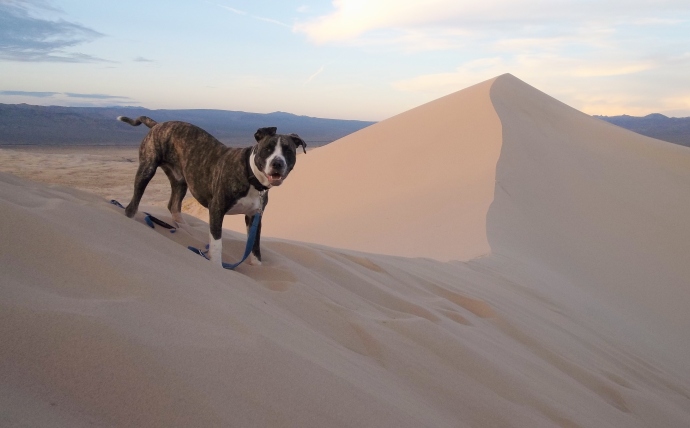 My first few weeks at Vermilion Cliffs was heavily focused on helping Shadow adjust to his new life. I knew his abandonment issues were going to be a long-term healing process. I was hopeful that consistency and stability may fast track his progress within the new home I had created for him. My immediate concern though was his understanding of the desert.

Within a short period of time, I needed to turn my urban puppy into a desert dingo. Shadow had never encountered a snake, lizard or scorpion before. The grass was his familiar running surface, not sand, rocks and mud.

As a mama, my worst fear was Shadow coming home with cacti prickles in his face or nose. During the first few weeks of my desert stay, I became rather hyper-vigilant when it came to Shadow’s encounters with cacti. I didn’t want Shadow becoming a four-legged desert pin cushion.

Our first family hike was a few days after we arrived. I wanted to follow the black hose to our water source, a spring buried deep within the cliffs. Having the hoses above ground is a daily visual reminder of how precious water is.

Would human’s relationship to water be less disconnected if we had to “Jack and Jill” it every day?

Could having daily contact with our water source origin make us more aware of how limited this resource is?

I am mindful of the fact my life is dependent on the black hoses running deep into the cliffs. Every time I turn the faucet on, take a shower or fill Shadows water bowl, I am grateful that I have fresh running clean water at my disposal.

Within a few miles on the trail, we found ourselves looking down a dry waterfall. Shadow, like his mama, has a respect for heights; yet, still enjoys the vertical views. I am looking forward to the monsoon season to see if this waterfall starts to flow again.

At the top of the falls, we decide to sit and enjoy our backyard desert landscape. 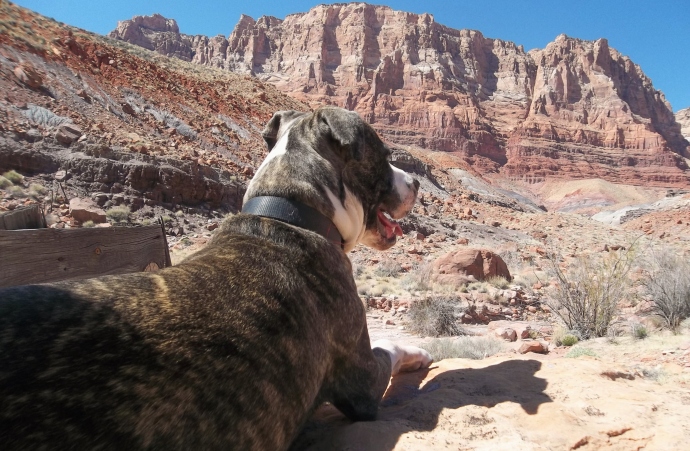 Shadow is a natural sunbather, yet he quickly learned to limit his time in the desert sun. 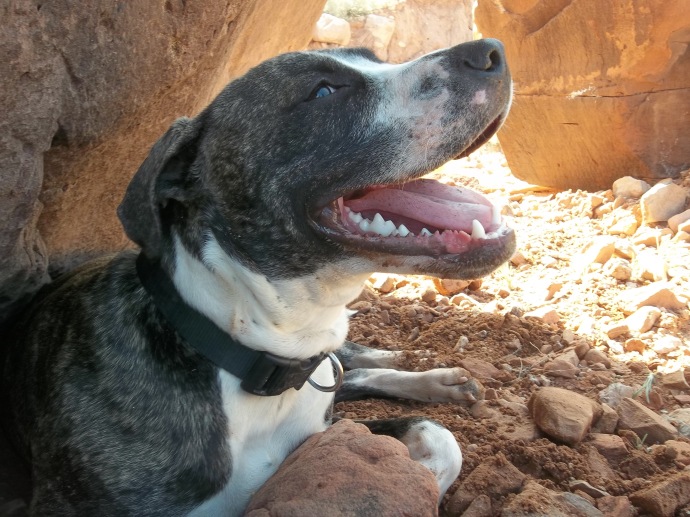 Have you ever looked at a trail of mud and thought to yourself, what if I put my head down and barreled my way through?

Would you be slightly deterred knowing it was quick mud?

Shadow wasn’t deterred! In fact, I have never seen a dog more determined and dedicated to coating himself in mud. 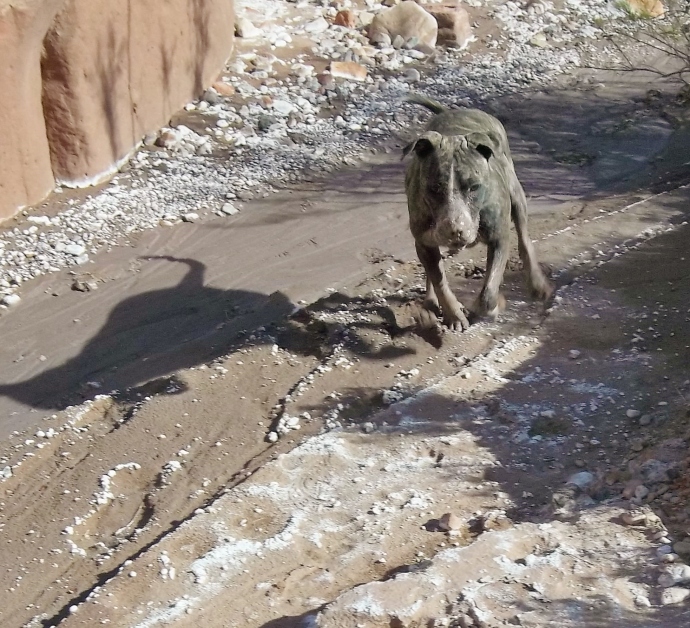 Within a few hundred yards of mud trailing Shadow transformed himself. My urban puppy went from a desert dingo to a tougher mudder canine. Shadow was looking more like a muddy javelina than a pit boxer mix. 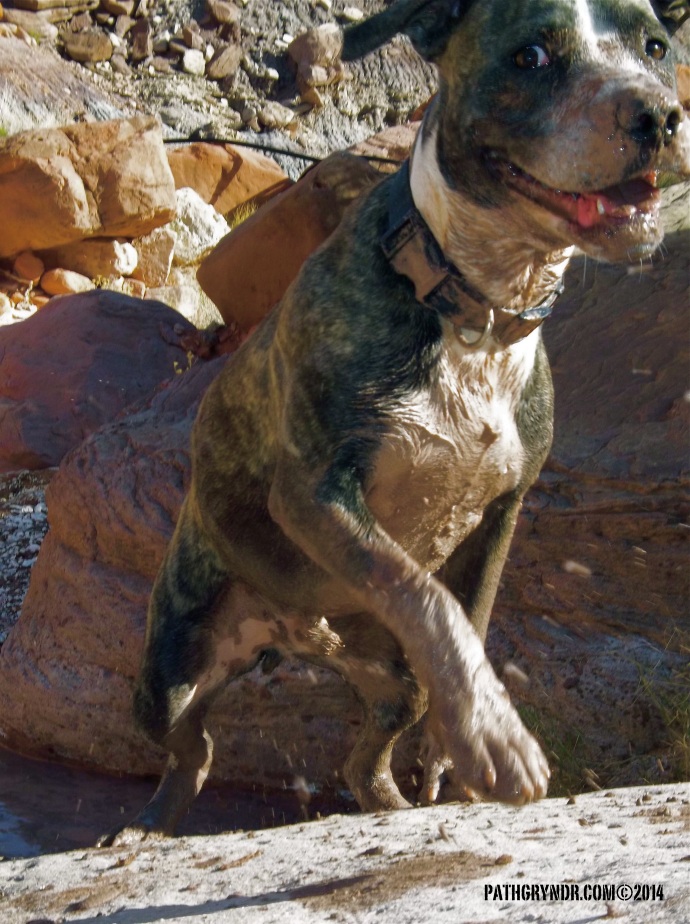 I don’t think I have ever seen Shadow so free-spirited and so filthy! In the human world, he had just experienced high-end beauty treatment, a mud bath, and a full body scrub. He was now the fully exfoliated canine.

As Min commented on to how dirty Shads was, I was feeling rather proud. Proud, because Shadow was being his natural self. For a brief second, he looked my way seeking a parental permission nod. I encouraged him and cheered him on, which seem to induce one of his happy dance sprints.

How many adults ever permit themselves to have a second crack at childhood?

At times I feel ‘growing myself’ up meant giving myself all the things I felt my childhood lacked or missed. Many years ago, a close friend asked me what was the key ingredient to my friendship with Min. To me, it was very simple. We gave each other our childhood back. We encouraged one another to play, be silly, and pretend that we were two latch key kids raising ourselves.

I think we offered Shadow a similar situation, the only difference is he has two very involved parents that encouraged him to PLAY! 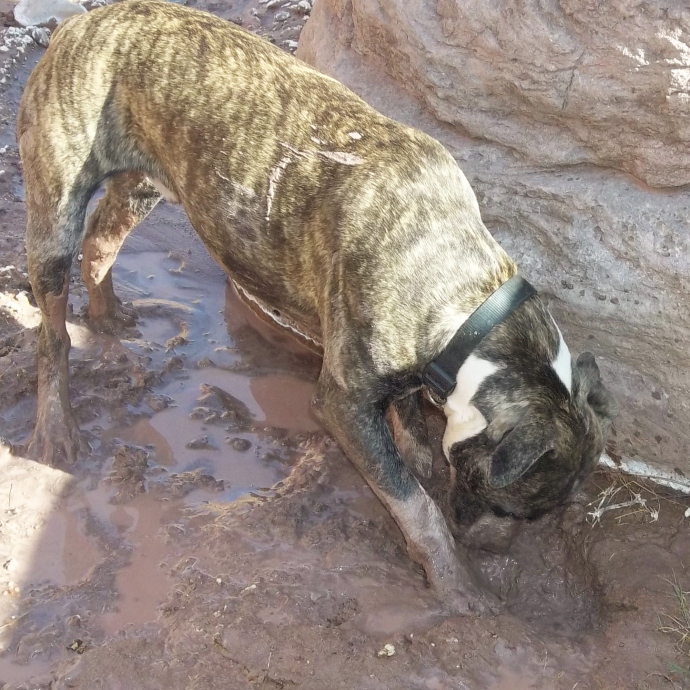 After our mud encounter, we continued following the hoses that ultimately would lead to our spring. 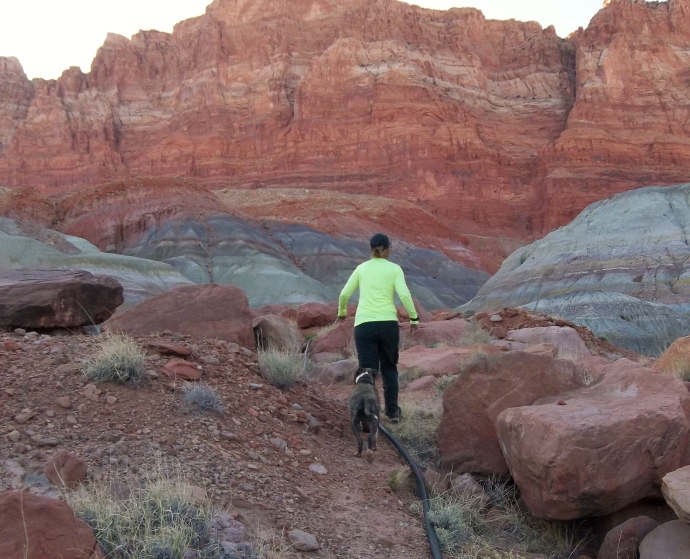 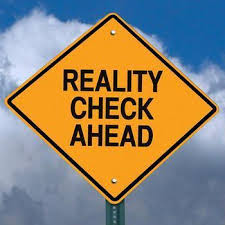 Have you ever created and sold a fantasy reality to yourself?

Perhaps you imagined or envisioned a work of simplicity into something far more elaborate.

Based on my experience within the desert, it seemed imaginable that deep within the Vermilion Cliffs lies a desert oasis. Somehow I had created a mental picture of our water source, even before I had seen it. Perhaps it was a pond, a pool of water, the ultimate liquid paradise where all creatures, great and small, come to hydrate and recuperate from the extremes of desert living. 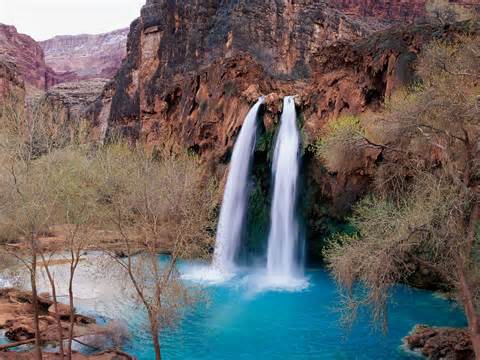 Blame it on my imagination, or perhaps watching too many Disney movies as a kid. The reality, there was no oasis; it was simply a hose lowered down a rock opening.

As we hiked deeper into the cliffs, the more surreal the terrain and landscape became. Was I surrounded by the Vermilion Cliffs, or was I headed for a planet yet to be discovered? 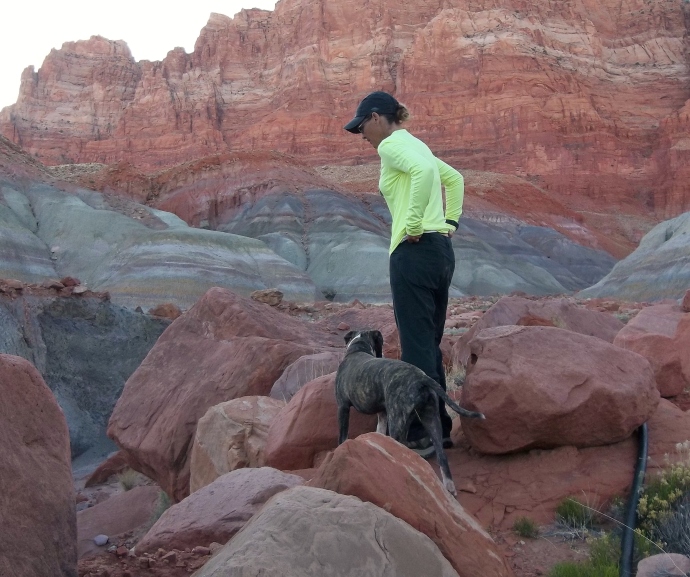 I wondered what Shadow thought! This desert landscape was not reflective of his former surrounding in the Fresno canals. 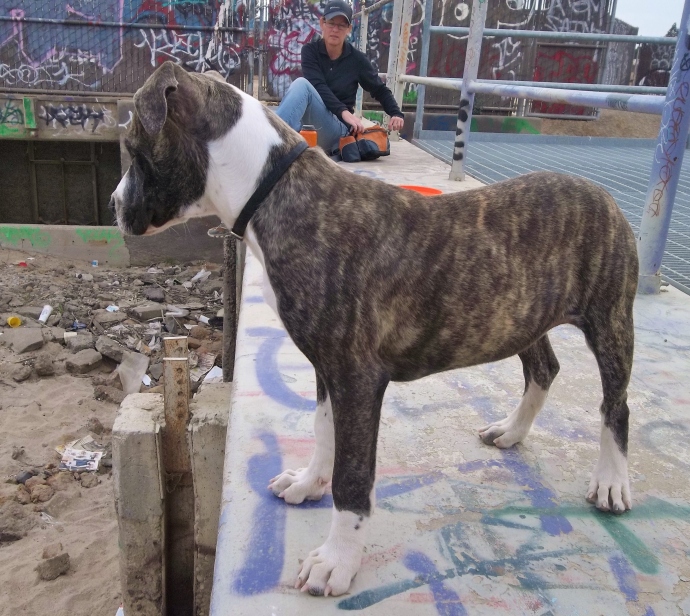 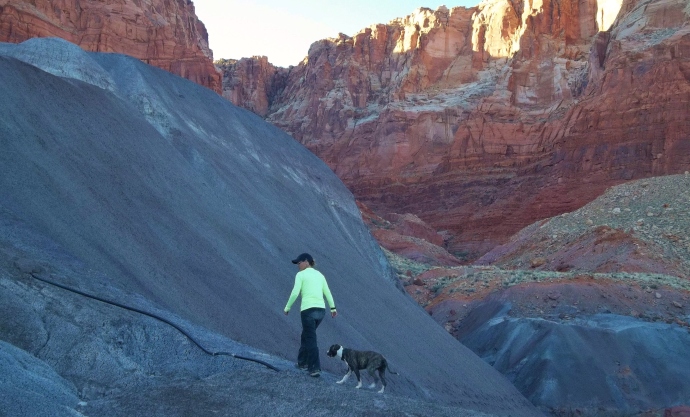 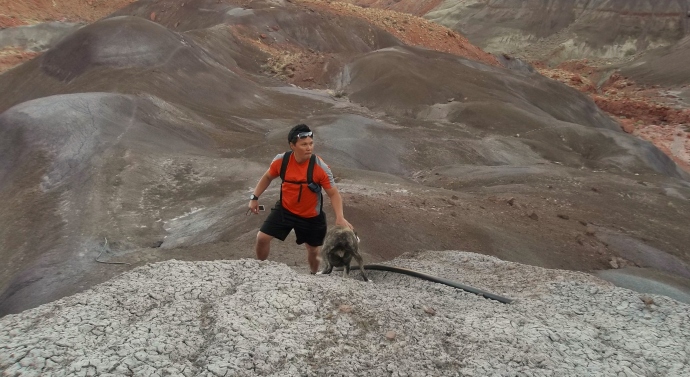 On our first backyard hike, Shadow has been exposed to a completely new environment. He displayed a  great understanding of heights, and depth perception when it came to rim walking. He possessed great balance  and knew how to slide down a gravel decline in a controlled manner. He instinctively seemed to be very cautious of cacti and paid close attention when negotiating paths with the prickly monsters. With that said, I knew at some point he would fall victim to a cacti. I just prayed no prickles would be lodged in his precious little face. 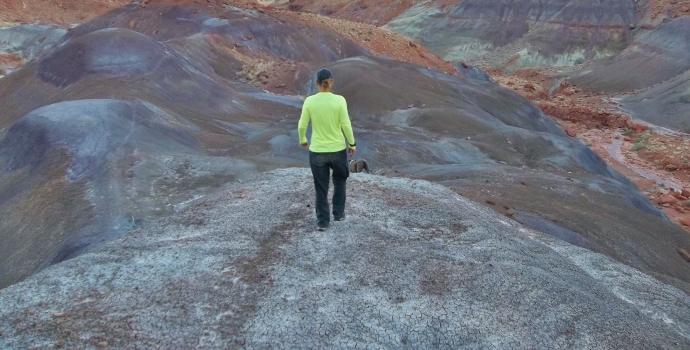 As the sun started to set, we headed for home. Covered in dust, dirt and mud I feel like we all got a chance to taste, touch, feel, see and experience our new backyard.

My life was falling into place. I felt I was where I wanted and needed to be. Vermilion Cliffs may be an isolated outpost; however, I feel I-SOUL-ated. The one thing I could never afford was TIME. TIME is the currency I now operate in, and I feel very lucky!