“At sunrise, everything is luminous but not clear” Norman Maclean

“Happy Birthday Min”, was my morning greeting, as we headed out to capture his birthday sunrise. 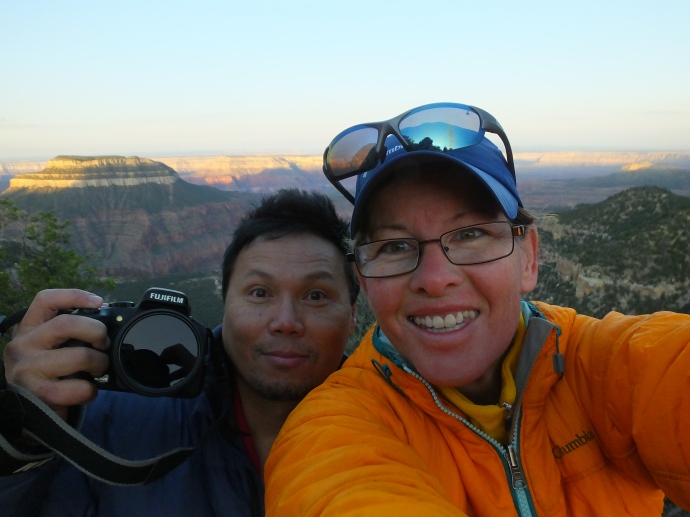 We both felt incredibly blessed to wake up to this jaw dropping view along this remote section of the Grand Canyon’s North Rim. 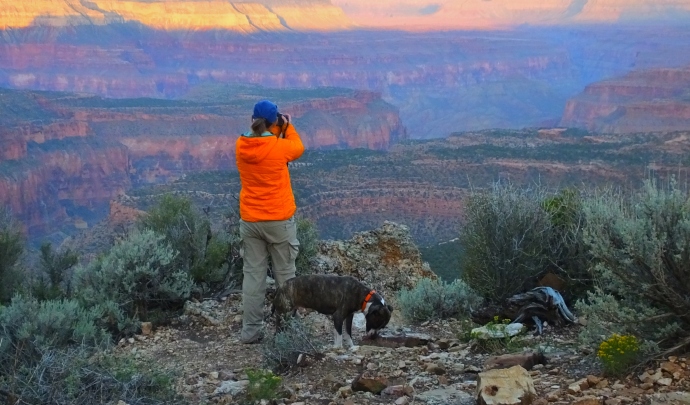 Many of my friends have asked me over the years what is the difference between camping in a national forest as opposed to a national park. My answer is rather simple, FREEDOM! 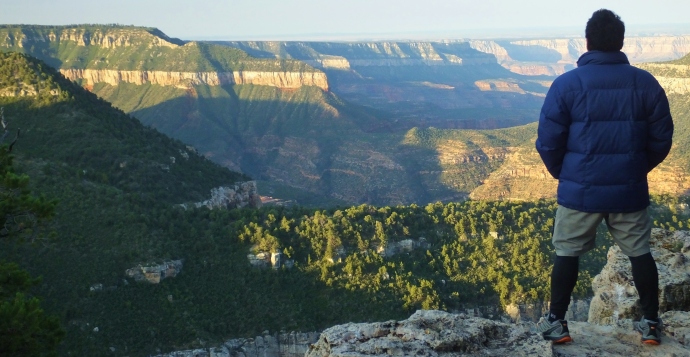 National forests are less restrictive. There is no entrance fee, and camping is permitted anywhere. Granted there are no facilities, not even a porta potti, however if you are willing to camp this remote peeing outside should not be a problem. 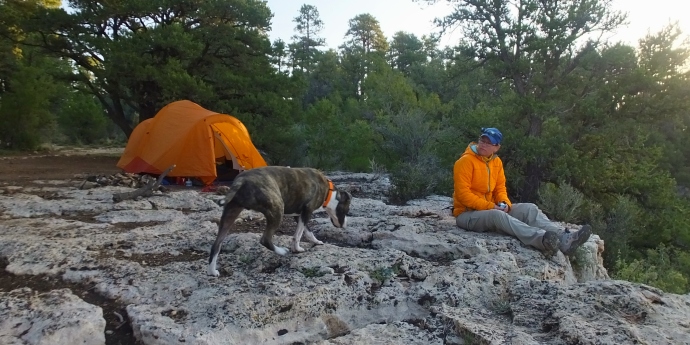 Once the sun was completely up, we headed back to camp for a late breakfast. 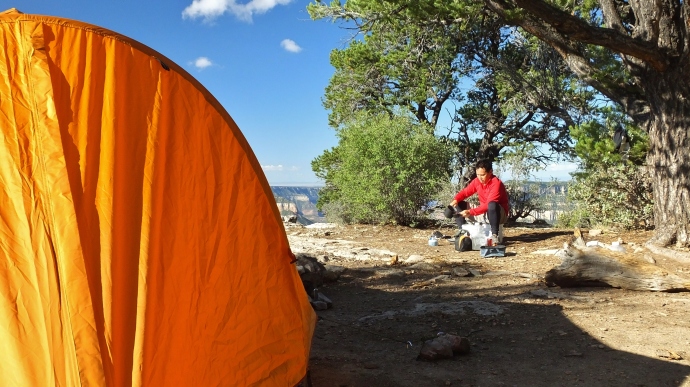 It was a refreshing change having this birthday base camp without a set agenda. There was no daily hiking mile quotas, no worrying about having to find a water source, and no daily breaking down of camp. If we needed additional supplies, it was a simple walk to the car. 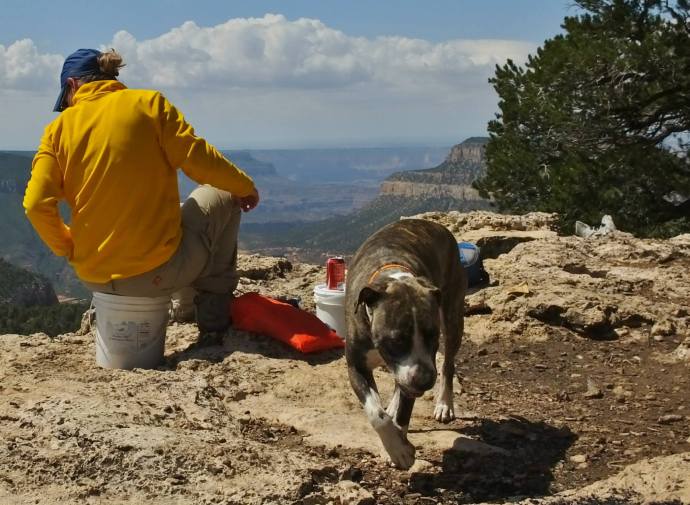 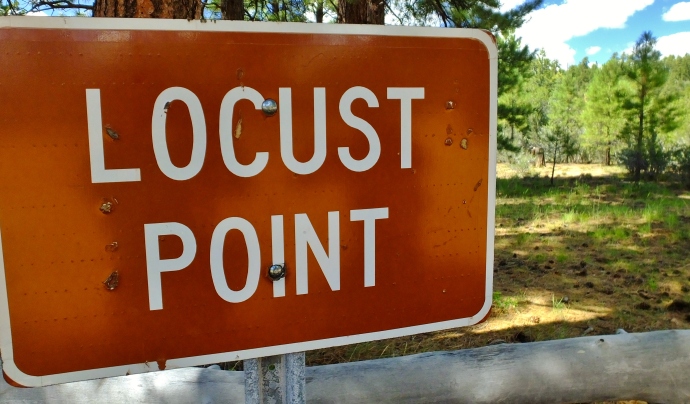 After breakfast Min and I walked the 200 yards to the Locust Point parking lot, where we met an ultra runner named Paul. Paul, a fellow generation X’er, left his mainstream career for a simpler life. In a blog recently I talked about the Generation X experience and the unfulfilled expectations of our parents. 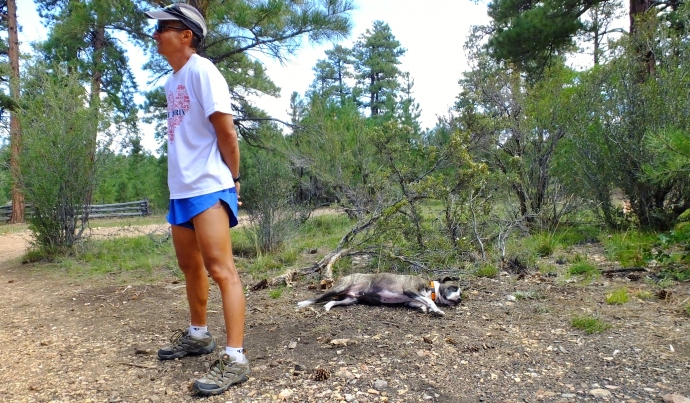 I feel our generation has become rather adaptable, in harsh economic times we have found ways to reinvent ourselves. Perhaps we are a new breed of Generation X’ers. For lack of a better term, I now refer to us as Generation X-Y (WHY).

Generation X-Y questions the idea of working just to pay bills. We do not crave the 3000 sq ft home that somehow became the new normal. We prefer to LIVE, and work second. We do not fit into the D.I.N.K. category, double income no kids, which seemed to grow in popularity in the late 80’s. S.I.N.K., single income no kids, might be more fitting. It was refreshing to meet Paul, a like minded individual who valued TIME.

I feel generation X-WHY operates in the currency of time. Time is one thing most of us can not afford, yet we seem to value it more once we find ourselves facing our own mortality. While mainstream media has normalized consumerism, I wish the living more and needing less community made everyday headlines. Living simpler does not necessarily mean having a tiny house on wheels. It means one is willing to cut expenses, change careers if necessary, in order to pursue the passions one might normally wait to explore upon retirement. The question remains, why do we wait to LIVE MORE?

After saying goodbye to Paul, Min, Shadow and I headed out for a hike. This would be Shadow’s first forest hike above 7500 ft. 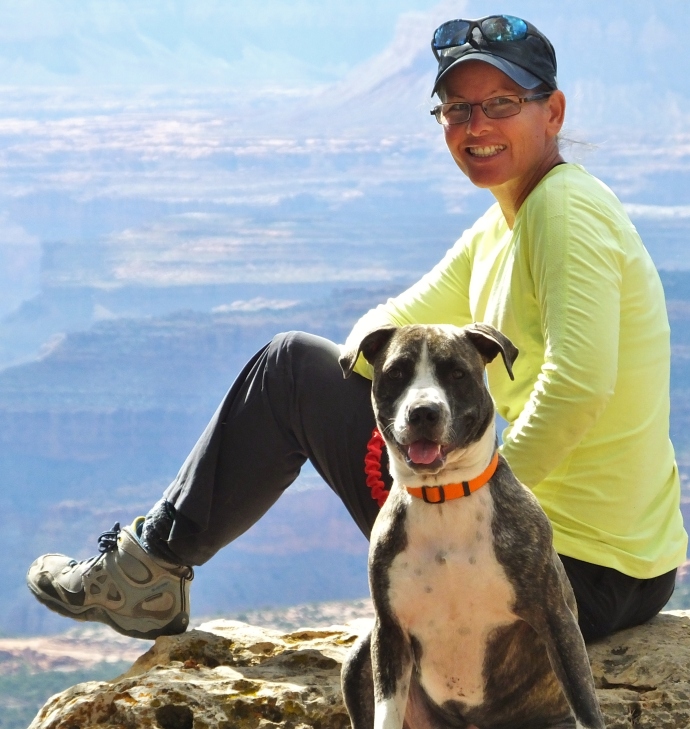 I am not sure who appreciates the outdoors more, Shadow or me. Min being the great father he is,  made sure he pointed out all the major landmarks to Shadow. 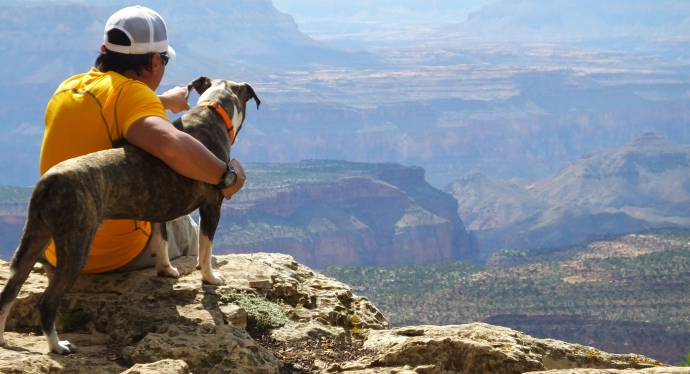 Leaving the rim, we continued along the trail leading us through ponderosa pine and forests of aspen. 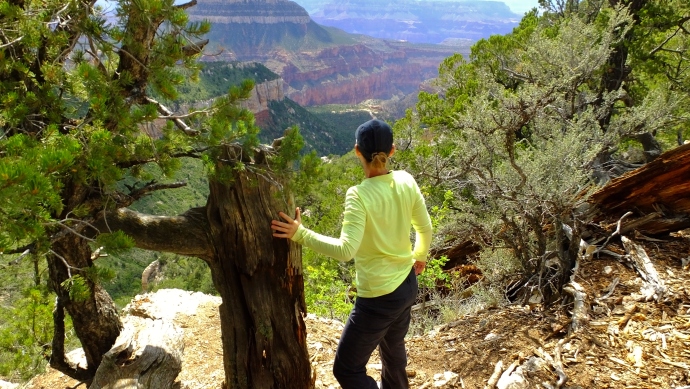 I wondered what Shadow was thinking as we ventured further into the forest. 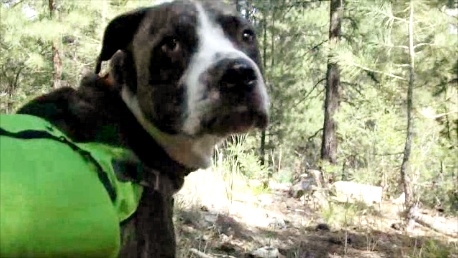 Was this just another hike for him, or was he like his mama, where the trail offered an escape from identity? 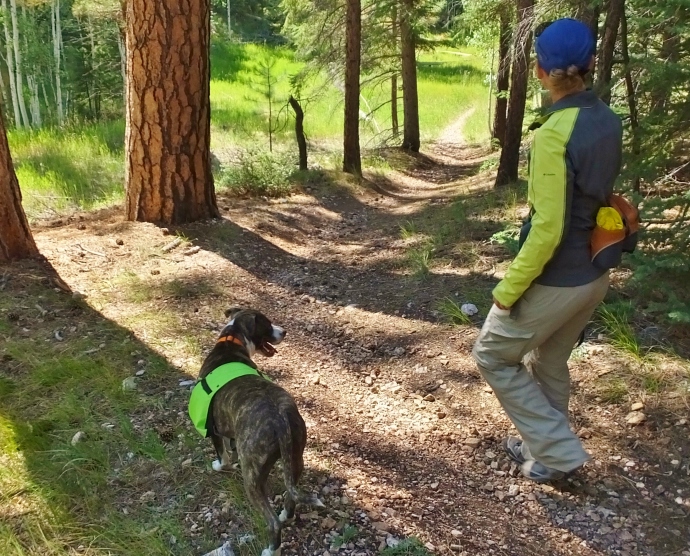 As a child, I had no sense of identity. I understood that I possessed distinctive characteristics that created a unique self; however as an adopted child having no sense of my personal history created more of a dent in my I-dent-ity. 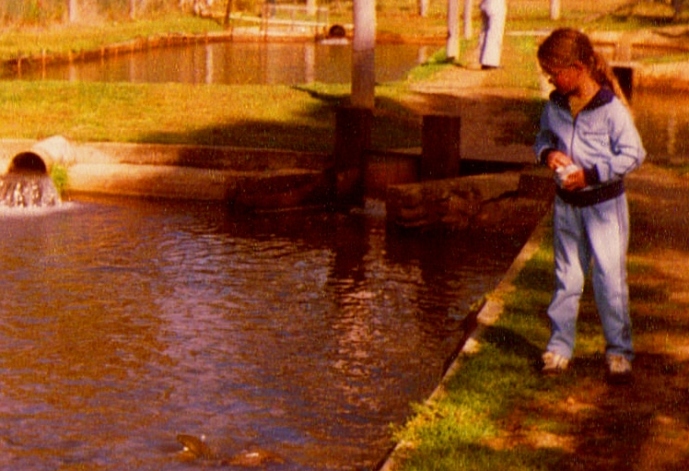 Even now as 43 yr old woman, I still feel like an egg that hatched and at times feel like I’m visiting the planet, as opposed to a participating Planetarian. The beauty of being on trail is assuming the identity of a nobody. In the wilderness I have no history, there are no facades, and there is no past or future. In many ways, I guess you could say I am exploring the mystery of presence. 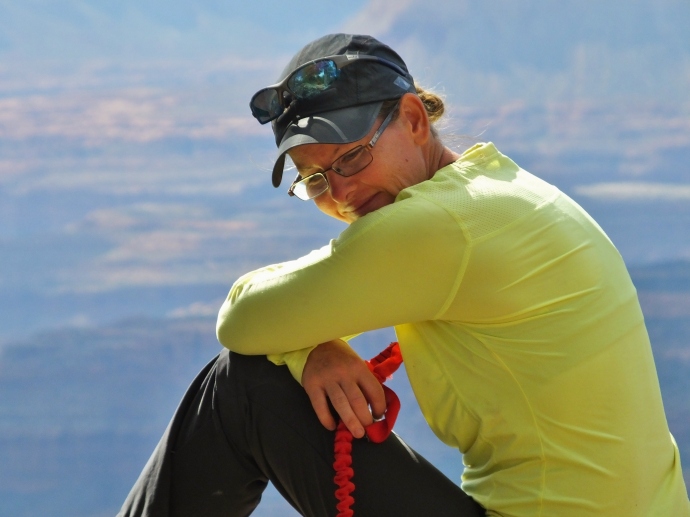 Undoubtedly hiking has become an active meditation for me. Being on trail frees me from space and time. As a colleague once said, “Leigh, it sounds like mindless walking”. I think my friend Muk (Pacific Crest Trail Thru Hiker 2013) best explained mindless walking as “float walking.” 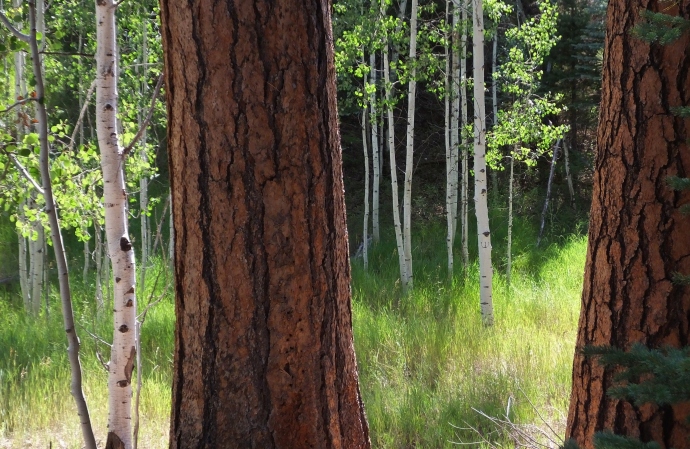 Hiking has always offered me a form of elemental therapy. Over the years I have found quietude, equanimity, peacefulness, and self-possession on trail. 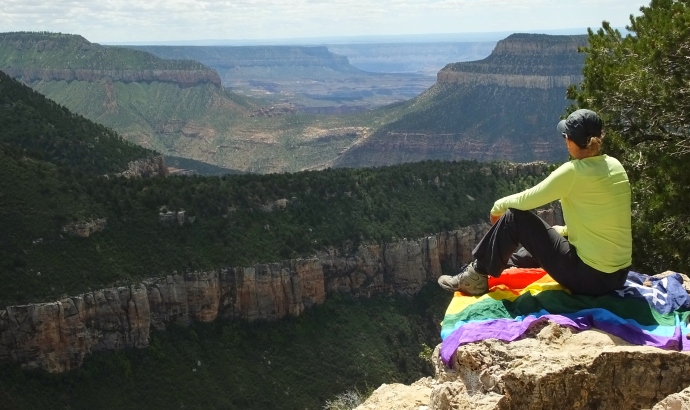 Imagine if physicians prescribed elemental exposure as a routine RX. Call me weird, however, I feel reconnecting with Mother Nature can remedy disconnection with oneself. 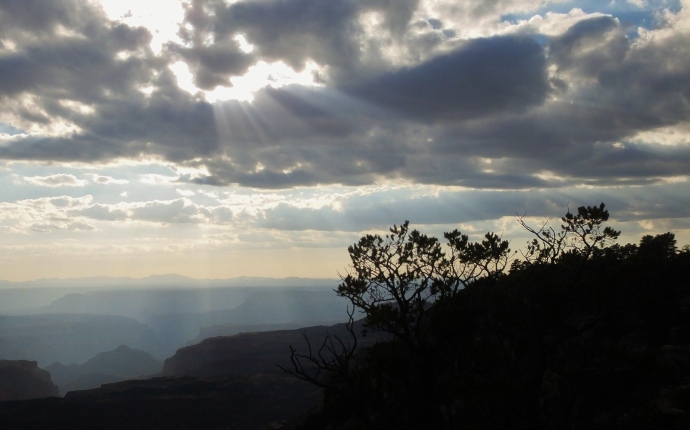 On the return leg of our hike, Shadow decided to sprint himself lame. Shadow might blame it on his first encounter with a deer, while I hold Shadow’s love of running and his curiosity culpable. 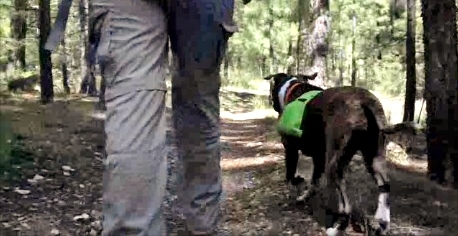 Either way, as soon as we arrived at camp Shadow put himself to bed.

It was official; Shadow was out of action for the rest of the afternoon. 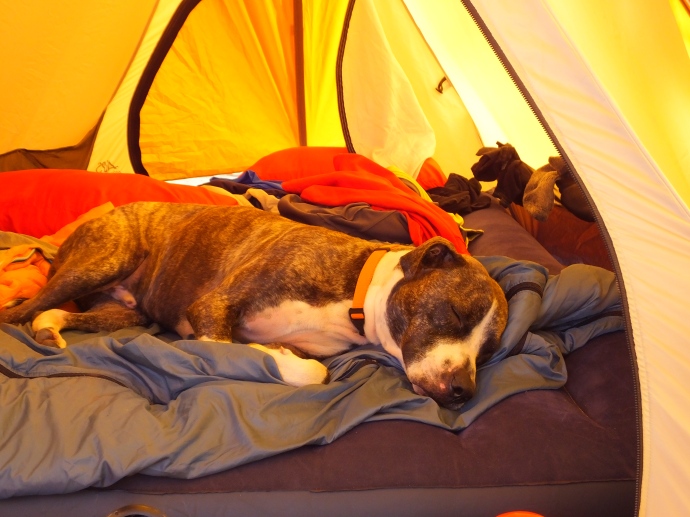 Just before sunset Shadow, Min and I headed over to the point to honor the ending of his birthday. Sunrises for me have always been about acknowledging the possibilities of a new day, while sunsets tend to serve as reminders of self-reflection and gratitude. 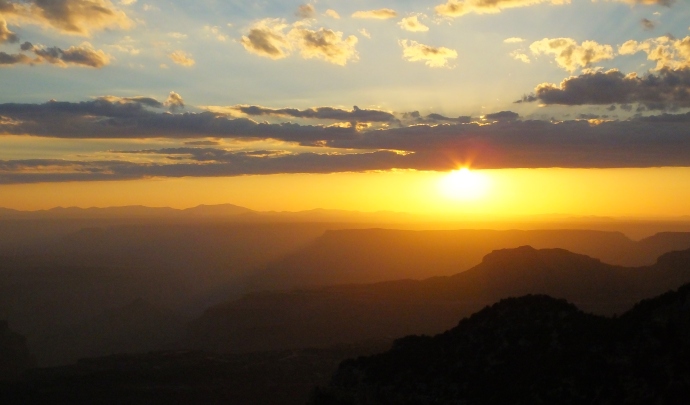 On this day I was grateful that my best friend of 17 years still holds the same passion for life as he did when we first met. The key to our friendship you may ask; I feel like we gave each other our childhoods back. Imagine being on an eternal play date with someone? I can only hope we both find this quality in our future love interests and at some point our spouses. 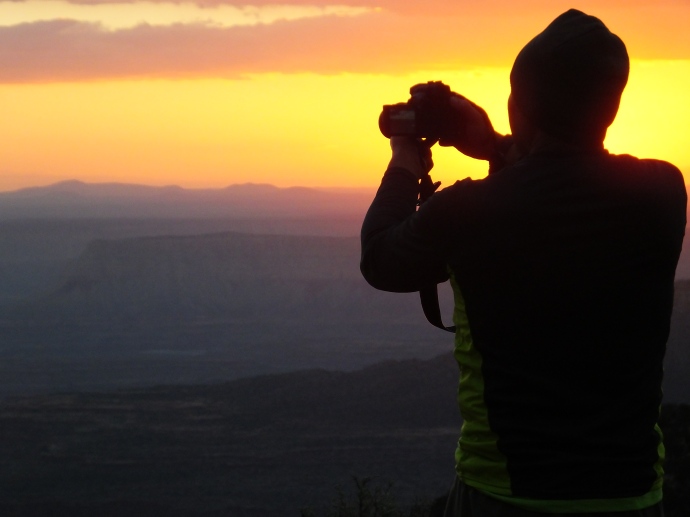 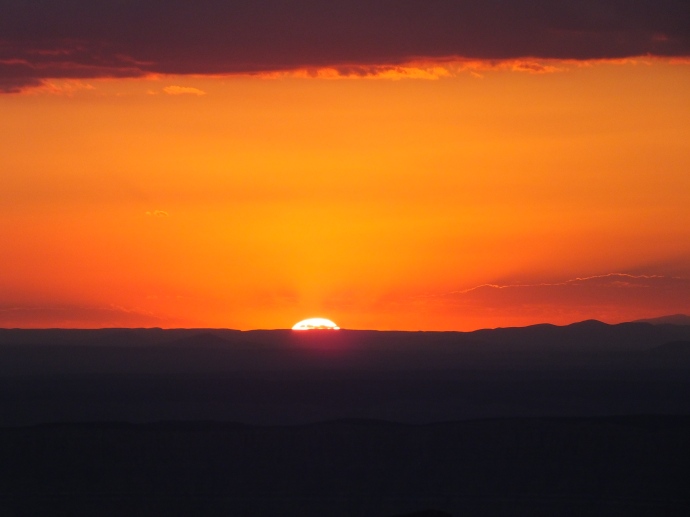 As the sun painted the sky orange red we headed back to camp. The temperature had dropped into the low 40’s, the coldest temperature I had experienced all summer. Tonight it would be chicken noodle soup and yet another night to test out my new Alps four season tent. 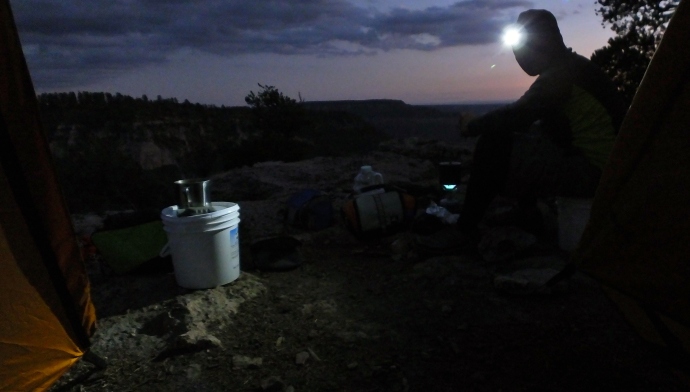